First let me tell you that I really like the artwork of Chineasy a lot and I really felt inspired by Shaolan’s Ted Talk (see the video in the end of this post). I had been creating similar Chinese character artwork for 2 months before I saw Shaolan’s Ted talk. And guess what: I almost stopped working on my characters because I saw that Shaolan was so far ahead. Who would need Marcus’ illustrations if we already had Shaolan’s beautifully illustrated characters?

Why don't you see the Chineasy-WoMingbai Characters Comparison that you would expect here in pictures? Well, we got threatened to get legal problems if if did use Chineasy Artwork. This threatening was not through Chineasy or Shaolan directly though. We tried reaching out to her by email but did not get a reaction yet. Until we get her official "OK" we willnot show Chineasy artwork on this website (the only exception from the rule: in the end of this page you can see Shaolan's wonderful talk on TED through Youtube video). 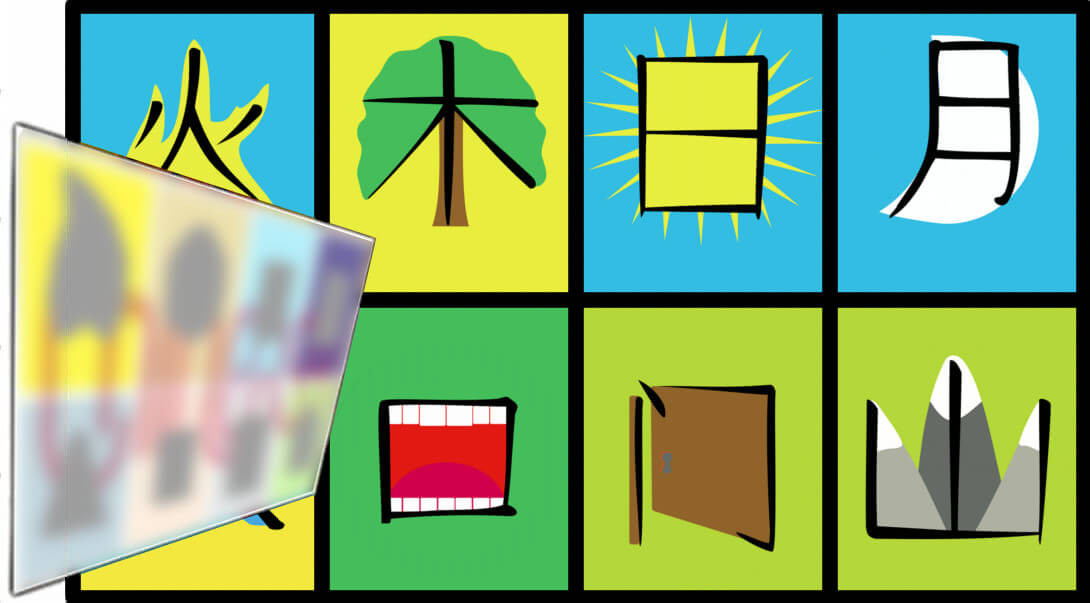 Well, you can see that I didn’t really stop – for a reason!

Although the general idea of helping people memorize Chinese characters by illustrating them is very similar, I soon noticed that Shaolan is not always illustrating the characters that I needed. Right! I also need those illustrations I create myself! I am still learning Chinese – Mandarin Chinese like they speak and write in Mainland China. The characters Shaolan illustrates are sometimes the traditional ones (being used in Taiwan where she originally comes from) and sometimes the simplified version used in the Republic of China (where I live, work and study Chinese). 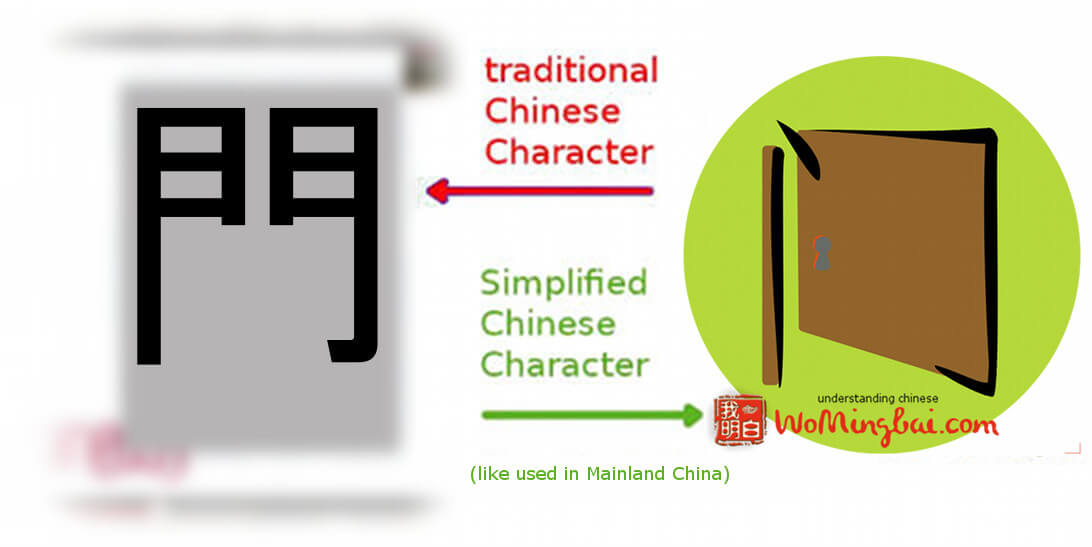 This fact was already a big motivation for me to keep on illustrating “my” Chinese characters. I would always illustrate the simplified Chinese characters only. Honestly, sometimes illustrating traditional characters is more fun since you can often see the actual picture better in them rather than in the simplified ones. But you know what? I want to be able to read “China Chinese” sometime – so I need to learn the “Chinese Chinese” characters. And this is the reason for me to keep on illustrating! I admit, Laoshan always tells us whether the character illustrated is from the traditional or simplified character set (and sometimes that doesn’t matter because they are the same). But to me personally it does matter that I learn and memorize only the form I will actually need. There is a second reason that motivated me to keep illustrating my own Chinese characters – that is the fact that there are many thousands of characters in the Chinese written language. That makes me want to learn only those that I will really use, regardless if the picture of an uncommon and rarely used character is easy to memorize or not. Actually I got a little story about 奻 (you see twice the character 女 “female” combined in one character) from Shaolan’s Ted Talk. It is pronounced “nuán” and means “argument”. It was so easy for me to remember this characters and I was very proud that I wanted to share it with my wife: “Two women are having an argument … three women mean adultery”. And guess how disappointed I was when she told me: “Sorry Marcus – I do not know this character”. 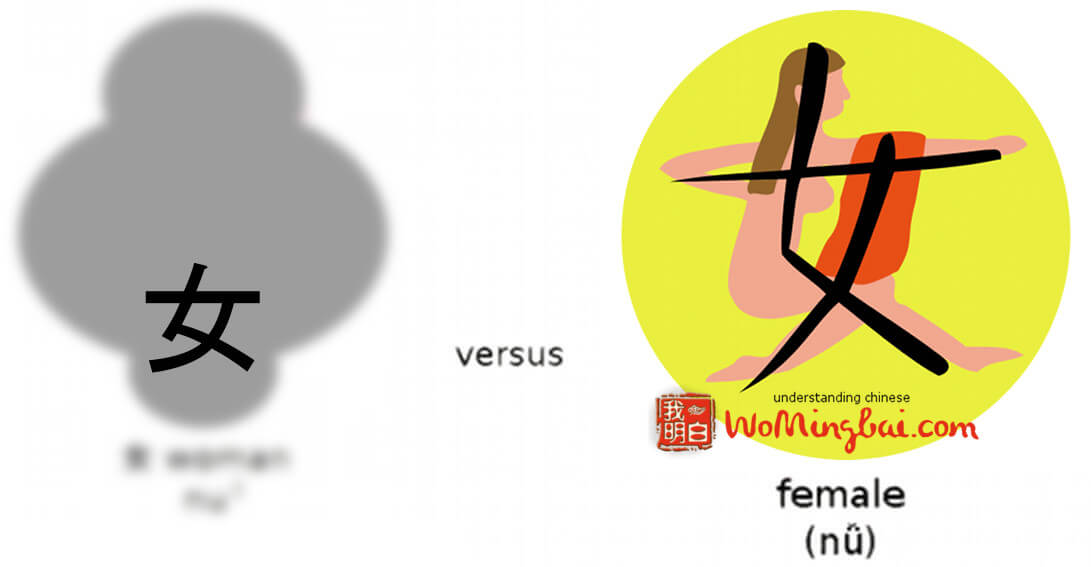 Womingbai illustrations will not introduce very rare characters. We want to memorize only those we will actually need when reading a newspaper or some other Chinese literature.

Just imagine – a Chinese woman, graduated from a Chinese college, reading Chinese newspapers, Chinese magazines and Chinese books every single day tells me that she doesn’t know the Chinese character “奻” nuán (nuan2). I went back to the Chineasy website where this character is described as well and noticed that its usage there is set to “rare”. You can imagine that I felt a little disappointed that I learned this character while I could have learned the one that I could actually use some day? Nothing against Shaolan and her Ted talk – I still admire her braveness and her charisma, I still find her extremely inspiring and I will definitely buy one of her products (basically because I like the artwork and it will help me memorize and understand the characters I illustrated already by providing alternate pictures that would help explain them better). But I really like to skip those “rare” characters and the traditional Chinese ones since I simply do not need them. Last but not least there is a third reason why I went on and will go on illustrating my own WoMingbai set of Chinese characters: I try to not just have a picture that would help me understand the Chinese characters – but I wanted pictures that help me understand why all these lines are present in the characters I am learning.

Unlike Chineasy which concentrates on presenting great and simple artwork, that “just” helps us to understand the Chinese characters, we are trying to keep our Womingbai illustrations as close as possible to the character strokes themselves – trying to give every stroke a resemblance in the image we draw. We do not always succeed – but we try our best! Believe me it is not easy to give every line in a character a meaning and I must admit that “the inventors” of those characters – the ancient Chinese would probably turn around in their graves if they saw my images and explanations. But it is really great to see how nicely the WoMingbai characters are helping me understand and memorize the Chinese characters of everyday life. But don’t be afraid, people, WoMingbai is not just the illustrations drawn by someone still studying Chinese.

WoMingbai wouldn’t be Womingbai without Aleksandra, a Chinese language professional from Russia, living and working in Beijing, China, who constantly helps me to understand the correct meaning of the Chinese characters I am about to illustrate, or who would tell me that my association of a characters was so completely against the actual meaning of it that I would discard my artwork and try something new. Aleksandra is the good soul, helping me and all the other WoMingbai students with the characters meaning and usage. She teaches all of us how to use the characters right and gives some additional hints on how to memorize them. You guys know what? Aleksandra and I are both foreigners in China, both not native speakers or readers of Chinese.

And our visitors/students are foreigners as well. We think that our personal experience on what helped us to learn Chinese and what did NOT help us are the benefits allowing us to create the best Mandarin Chinese learning experience possible. Of course although Aleksandra is a professional in the Chinese language, we are aware that we are not native speakers!

Therefore we cooperate with Chinese language schools from all over the world – especially with “Live the Language Mandarin School” in Beijing, teachers of which are all native Chinese speakers + certified and experienced Chinese as a foreign language teachers, who help us check and approve all our materials before publishing. Please feel free to share any ideas and critics with us.

Now let us share the really inspiring Ted talk of Shaolan which already helped thousands of people to realize that they can learn to read Chinese … with ease!: