There are more than 100,000 different Chinese characters, but most of them are no longer in use today. Very educated Chinese may know 5,000 different ones. In 10 years of school and regular studies, Chinese students learn about 3,000 characters. For everyday needs, knowledge of 3,000 to 5,000 characters is sufficient. About 1,000 are needed to read about 99% of a Chinese daily newspaper.

The Chinese script is used especially for writing High Chinese: in China and Singapore in the simplified form of the short characters, in Taiwan, Hong Kong and Macau still in the traditional form of the long characters. As a cultural export, the Chinese script also reached neighbouring countries around 600-800 AD and is still used today in South Korea and Japan as part of the national writing systems. The long characters are also used there, although in Japan they have been used in a moderately simplified form since shortly after the Second World War.

In contrast to the letters of the Latin or Greek alphabet, for example, many Chinese characters are iconograms and ideograms, i.e. abstract pictorial representations of concepts and abstract ideas such as above and below. I am using this for the Womingbai project, in which I also try to illustrate what is apparently not iconographic. In the course of more than 5000 years of development, characters have of course moved away from their original representation, most recently during the type reform in the People's Republic of China in the 1950s, but for many characters the meaning can still be read out with a little imagination.

The different categories of characters

The Chinese script consists mainly of logograms, but for phonetic writing of foreign words some of them are also used as phonetic symbols. In general, one syllable is assigned to a character. Traditionally, according to the first character lexicon of Chinese writing, the Shuowen Jiezi (2nd century), characters are divided into six categories based on the way they are formed or derived. A few are pictograms (象形, xiàngxíng) and symbols or simple ideograms (指事, zhǐshì). A third small group is formed by composite ideograms (會意 / 会意, huìyì). The vast majority (over 90 %) are phonograms (形聲 / 形声, xíngshēng). The last two categories are borrowings (假借, jiǎjiè) and synonyms (轉注 / 转注, zhuǎnzhù). This distinction of characters into groups is called Liushu in Chinese (六書 / 六书, liùshū), the Six Categories of Chinese Characters.

History up to the People's Republic of China

The Chinese script is over 3000 years old and thus has the longest unbroken tradition in East Asia. The oldest Chinese characters found so far are pictograms [3] from around 1400 BC, carved into cattle bones (especially into the shoulder blade, so-called oracle bones) and turtle shells (for divination of hunting etc.), which were discovered in Anyang in 1899. It is assumed that 5000 different signs already existed at that time.

In the middle of the first pre-Christian millennium, pictographic writing developed into a marketable script capable of completely reproducing the syntax and semantics of some of the languages of that time in the area of today's People's Republic of China. With the unification of the Chinese Empire under the first Emperor Qin Shihuangdi in 221 B.C., a great unification of writing took place.

In interaction with the civil service state established since the unification of the empire (Qin dynasty), the Chinese written language became the lingua franca through its use throughout the entire catchment area of the Chinese empire, which connected the various Chinese language communities with each other and enabled a relative unity of the Chinese cultural area.

In China, politicians and civil servants had to be good writers right into the 20th century if they wanted to gain influence - and not, as in the West, good speakers. Many passages describe how disappointed many Chinese people were when they heard politicians like Mao Zedong or Deng Xiaoping speak for the first time.

The relationship between character and meaning

Originally, Chinese characters were once so-called pictograms, i.e. symbols that were supposed to represent reality in simplified form in pictures. In the course of the millennia, many of the characters have changed and the pictorial representation has been lost. In addition, many new characters have been created over time, some of which were composed of several other characters and individual building blocks.

Even today there are still some Chinese characters that have retained their pictorial character over the millennia. Today, with the vast majority of Chinese characters, one cannot automatically infer the meaning of the content from the visual form!

With our self-designed illustrated characters we try it nevertheless: 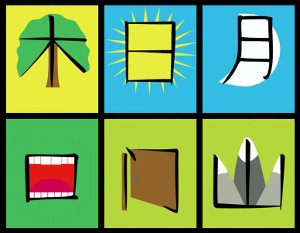 One character corresponds to one syllable

But one syllable can correspond to different characters

The most comprehensive Chinese dictionaries contain a total of around 87,000 different characters. A proud number! In fact, however, the majority of these are only rarely used in everyday life. For everyday needs, for example to read news and books, it is quite sufficient to be able to read 3000 to 5000 characters - with 1000 characters you can cover about 99% of a normal daily newspaper.

Many characters are pronounced identically. Even if they have a completely different typeface and meaning.

Incidentally, it is also thanks to this fact that the Chinese language will never be able to do without its characters completely. Because to notate Chinese purely via the phonetic transcription Pinyin would lead to many confusions due to the small number of syllables and the resulting multitude of identical sounding words.

Most Chinese words consist of one or two characters or syllables. Some words also consist of three or, more rarely, even four syllables or characters.

Most characters contain so-called radicals, which give at least a rough indication of its meaning. The radicals in Chinese, for example, carry meanings like "person", "heart", "hand" or "mouth".

Words like sea, lake, tear and oil contain the radical for water (= liquid).

The shrunken / compressed form of the character for water 水, looks like this 氵und is also found in the composite characters.

Reading the pronunciation from the character

Of course, it is not like with our phonetic alphabet fonts, where usually each letter stands for a certain sound and we can pronounce foreign words directly by stringing together and reading the individual letters. The Chinese characters do not symbolize single sounds that, when read together, would result in a word, but whole syllables!

An example is the word 包 bāo, which means "wrap" or "bag". If you add the meat radical 月 to it, you get the sign for "body cell" 胞, which is spoken bāo Adding the hand radical 扌hinzu results in the verb "to embrace" 抱, spoken bào. And if you add the food radical 饣, you get the character 饱 bǎo for "full". In all three cases, the component 包 bāo thus functions as phonetium and thus gives a pronunciation hint.

When writing Chinese characters, the order of the individual strokes is not arbitrary, but is determined by seven basic rules:

If smaller components are grouped around a larger middle part, the middle part is written first

In the case of individual characters, these rules are interpreted differently from country to country, as shown to the right in the example of the character 必. In writing styles such as italics and concept writing, where the writing brush is not lifted off the paper between all strokes and the strokes are thus connected, this sometimes leads to significantly different forms of the same character.

Romanization of the characters: Pinyin

Pinyin was recognized by the ISO in 1982 as the international standard for Chinese transcription and is now the dominant transcription for High Chinese. In addition, the Latin transcription developed by Wade-Giles at the beginning of the 20th century is still in use, as is the non-Latin transcription Zhuyin (still common in Taiwan). Other systems, mostly based on the language of the respective translator, are no longer of any significant importance.

Entering the characters on the computer

Chinese characters are written on the computer with the help of various input systems for the Chinese script. Texts are entered on the PC at a writing speed per sentence that is roughly equivalent to what German word processors can achieve with German keyboards, for example. As an undesirable side-effect, new types of errors occur in the Chinese language area and in Japan when writing Chinese and Japanese texts.

When writing handwriting, on the other hand, the suggestions that computer-aided input systems make in dialogue are missing. Younger Chinese and Japanese people who are used to their input dialogues therefore often have difficulties in writing less frequently used characters or in expressing themselves correctly in handwriting. However, they can then look up these characters on their mobile phones or in electronic pocket dictionaries, which are often already very extensive because they contain the contents of several conventional dictionaries.